Scroll Down for more information

The Cocoa-Rockledge Garden Club was organized in the Sun Room of the Cocoa House on March 27, 1927. The Club has continued to be involved in community and county projects. Members are afforded the opportunity to become better educated in the fields of gardening, horticulture, botany, floral design, landscape design and environmental awareness. They also work on civic beautification projects within the community and with the youth to instill a love of gardening and respect for the environment. The Club was federated in 1928. The first flower show was held in the arcade of Delannoy Avenue in 1928. After leaving the Cocoa House, meetings were held in the Library, Old City Hall and, lastly, in private homes before moving into the new Garden Center built in 1964.

During 1951-52, the Club reorganized into four circles—Spade and Trowel, Green Thumb, Straw Hat, and Sun and Sand, and in 1982, Dirt Daubers was formed. The circles reunified into a one club in 2012.

The Garden Club has received many awards and honors for outstanding flower shows, outstanding Club of the Year in the State, several leadership awards, state and national world gardening awards, and more. Accomplishments by the Club include working with the State of Florida to declare Indian River Drive North and South, as well as Tropical Trail North and South, as “scenic drives.” The Garden Club maintains the Blue Star Marker on Route One and has instigated beautification projects in the surrounding public areas. The Garden Club designed and landscaped the grounds of the park, adjoining the Historic Derby Street Chapel in Cocoa Village.

The Club is responsible for establishing Bartram Trail markers, after William Bartram, an early environmentalist who traveled the southeastern U.S. and discovered the Longwing butterfly in Brevard County, Florida. He published “Bartram’s Travels” in 1791.

In 1980, FFGC past president Van Blanchard designed the Bartram Trail Markers placed on the routes traveled by Bartram. Mrs. Allan Cruickshank, a Cocoa-Rockledge Garden Club member, was instrumental in placing three markers in Brevard County. In 1981, the first marker was placed off State Road 46 at Hatbill Road, and in 1984 two markers were placed and dedicated at the Canaveral Wildlife Seashore. In March 2016, the Club donated $100 toward the installation of a Blue Star Marker at the new Cape Canaveral National Veterans Cemetery.

The Cocoa-Rockledge Garden Club, Inc. built the present Garden Center in 1963, with the dedication occurring in April 1964. The Club holds a special deed with the City of Rockledge to lease the land for $1.00 a year for 100 years, with 47 years remaining as of this year. 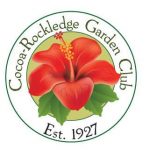